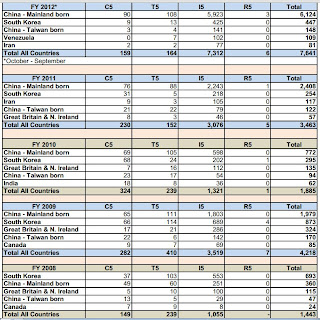 Here’s the key to the EB-5 category breakdown:

Those of you new to the EB-5 can read about the difference between Direct EB-5s vs. RC EB-5s here. Also, please note that visa numbers are not the same as I-526 numbers. I-526 petitions are filed by the investor who is investing; so if the investor has 3 qualified dependents (i.e. spouse and unmarried children under the age of 21), that means that 4 EB-5 visas were issued for that single I-526 petition.

Some interesting facts that we learn from this chart:

2. These top five originating countries accounted for 90+% of EB-5 visas issued in FY2012.

3. Mainland China accounted for 80% of EB-5 visas issued in the first three quarters of FY2012.

4. The numbers are bumping against the 10,000 yearly quota that has never been met before. (Which is leading to concerns over backlog in China’s per country quota – I’ll do a separate post on this soon.)

6. There are Iranians who prevail through the arduous OFAC (Office of Foreign Asset Control) requirements of the USCIS (even more stringent than the OFAC office itself requires!) and succeed in gaining permanent residency in the United States.

There we have it folks.